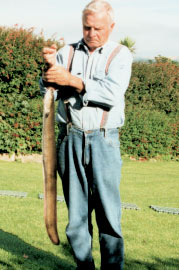 The River Lee produced this fine 1.7 kg eel for Dirk Mueller in August, 2002.

In compliance with a new bye-law, the CONSERVATION OF EEL FISHING BYE-LAW NO. C.S. 303, 2009, eel has been suspended from the specimen list from 14th May 2009. Claims for specimen eels taken before 14th May 2009 will be accepted. The new bye-law prohibits fishing for eel, or possessing or selling eel caught in the State. The commercial eel fishery has also been closed to conserve eel stocks in Ireland.
The angling bye-law will cease on 30 June 2012. For further information on the bye-law see the following link: http://www.fishinginireland.info/coarse/eel.htm

The long snake like appearance of the eel is its most distinguishing feature. It has small gills and pectoral fins, and a narrow dorsal fin.

Unlike all other coarse fish species the eel spawns at sea. The location of these spawning grounds are believed to be in the Sargasso Sea, although no adult eel has ever been located in this area. The newly hatched transparent larvae migrate across the Atlantic in less than one year eventually metamorphosing into small pigmented eels called “elvers”. At this stage the eel migrates into freshwater usually between April-June. The eel remains in freshwater for 7-40 years and then prepares for migration back to the spawning grounds. Prior to its migration back to the Sargasso the coloration of the eel changes from golden to silvery hue.

Eels have been aged up to 40 years old.

Worms and maggots in general. Small deadbaits are deadly for big specimens.