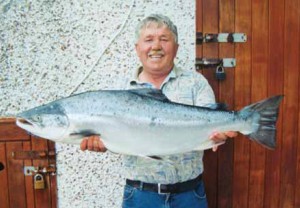 The unmistakable King of Fish. Found in most coastal rivers depending on water quality. Two angling quarries – spring fish (fish that spend 2 winters at sea) or grilse (fish that spend 1 winter at sea).

Slender and streamlined with silvery appearance and relatively large scales. some dark spots on flanks and has an adipose fin.

Short life span. A 5 year old fish would be old.

Migrating salmon do not feed in freshwater.